Rainbows for hope in COVID19 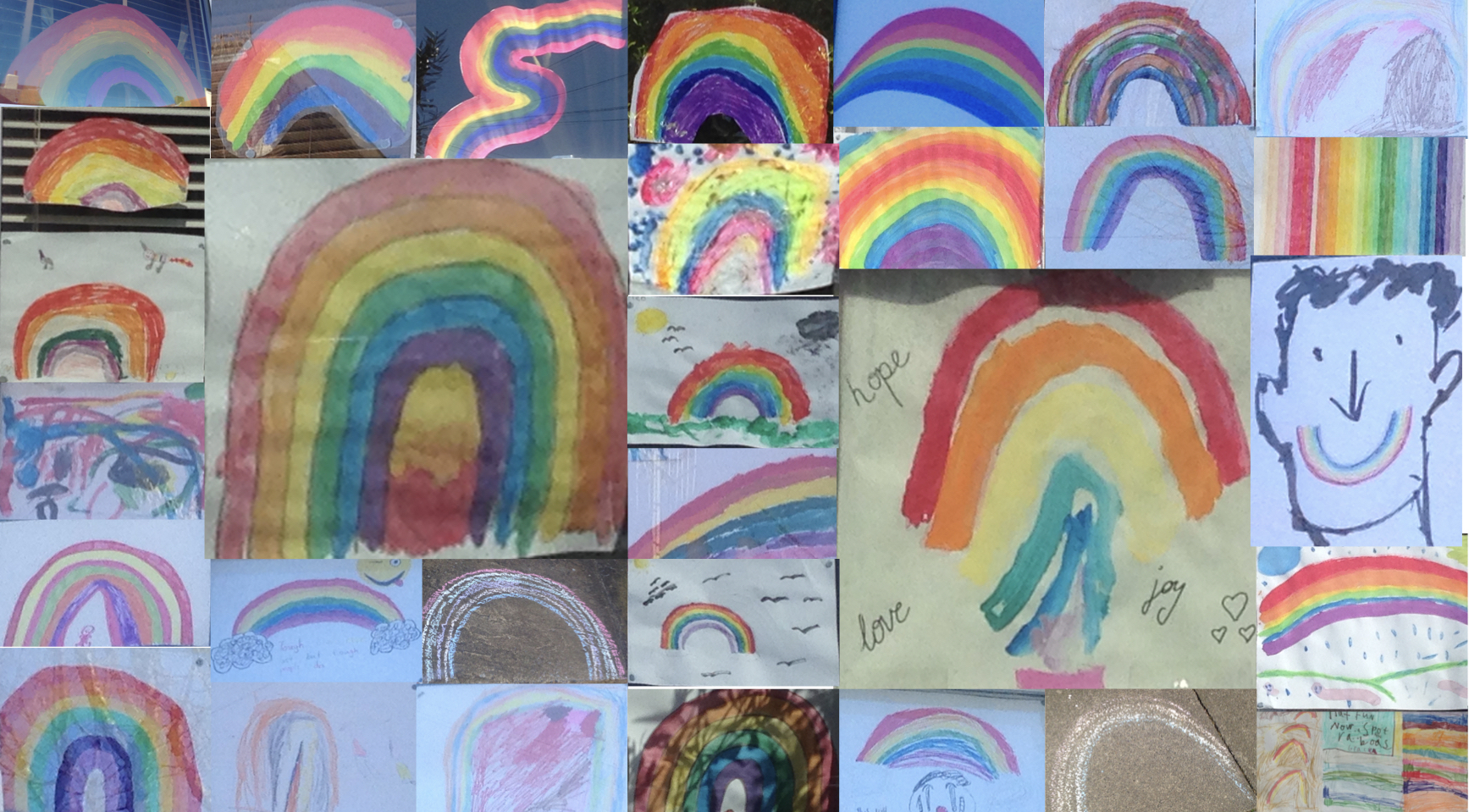 22 Apr Rainbows for hope in COVID19

Posted at 12:00h in blog by John Mellerio
Share 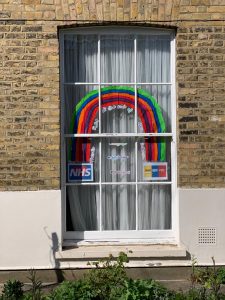 During this crisis, people have been putting pictures of rainbows in the windows of their houses and online to thank and celebrate NHS staff. The Colour Group adds its thanks as we explore the rainbow, its science and symbolism

Rainbows have an unrivalled dominance in the history of symbols of hope and of unity in diversity. They have been used all over the world in the service of a vast range of movements, from religious groups to LGBT liberation, the PACE flag against the Iraq war to the Wiphala flag of South American indigenous peoples are all rainbows. Innumerable other organisations have adopted the emblem so the Colour Group (GB) stands in plentiful company.

Rainbows have naturally inspired a huge amount of scientific curiosity throughout history. Aristotle had influential ideas succeeded by Ibn al-Haytham’s principles of optics. Scientists of the Islamic Golden Age devoted attention to them, and by the thirteenth century both Kamāl al-Dīn al-Fārisī and Roger Bacon had a good understanding of how rainbows worked. They knew that a rainbow effect could be produced by using a round glass bottle of water as a huge model raindrop. By using a small hole in a screen which blocks most of the sunlight, a ‘rainbow’ arc could be seen reflected back onto the screen. These scientists were able to explain the colours, shapes and arrangements of rainbows using just the geometry of spheres, reflection and refraction (the way light bends as it passes from one material into another). 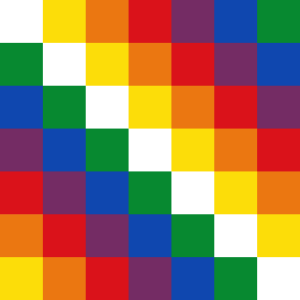 Some of the most influential work on the way we imagine rainbows was done by Isaac Newton while he too was isolated during the bubonic plague of 1666. Using the same screen with a hole in it to isolate a beam with a single angle of incidence, Newton considered the splitting of a beam of sunlight by a triangular prism (instead of a spherical bottle) into its many colours. Although this use of prisms was well known, he used the demonstration to show his theory that the colours could not be split further, but could be recombined to form white light – that they were the constituents of white light. Strongly contested when he presented his theory in public, the idea of the plurality and distinctness of colours, and the unity of their combination in white light is now fundamental to our view of the world. Newton also popularised the idea that there are seven discrete colours in the rainbow – (medieval observers had generally counted four, like the elements) which he favoured because of a belief in the mystical properties in the number.

The early theories of light, including Newton’s, had light travelling in straight lines, as rays, or in Newton’s case, particles. These ‘billiard ball’ trajectories can be used with geometrical rules to describe the shape and order of the rainbow, and even of a double rainbow, in which a larger arc, which is seen at 53° from the sun-observer access rather than the 42° of a normal rainbow.

Scientific narratives are indeed culturally powerful. Newton’s idea that light was made of particles was so widely accepted in the eighteenth century that even as William Blake railed against Newton and the other scientists for impoverishing his worldview he made extensive use of the particles-of-light image that Newton had promoted.

However, these influences change as the theories do. Despite its successes, the ray or particle theory couldn’t explain ‘supernumerary’ rainbows: extra pink and green stripes on the inner violet edge of the rainbow which don’t fit neatly into our idea of a standard rainbow. 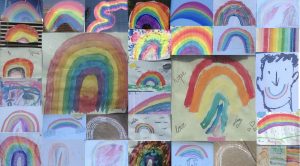 These extra colours are caused by interference of light waves on their interaction with the raindrop. They depend strongly on the shape, size and temperature of the raindrop and so are not observed using the big round bottle model, which explains why they had been previously overlooked. In order to understand these interference colours it took a description of light as a wave. This theory liberated us to see more real features of the rainbow, and also to notice that rainbows can be affected by weather conditions, changing the colour mixing, balance and angular extent of the arcs. Understanding this means we can tell something about the raindrops causing the rainbow by looking at its appearance. However, despite the many updates to the idea of the ROYGBIV-bow, it seems like our mental image of rainbows is taking a while to catch up.

The idea of ‘unweaving the rainbow’, a phrase borrowed from Keats, has been used to denote a loss of magic in a scientific worldview. Although widely referenced and  appropriated by other poets seeking to expose the poverty of a worldview which includes science, the origin of the phrase is somewhat more ambiguous. It is found in Keats’ poem Lamia in this passage: 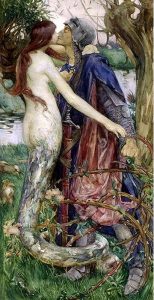 The Kiss of the Enchantress, watercolor painting. Inspired by the poem “Lamia” by John Keats. By Isobel Lilian Gloag (Public domain)

…] Do not all charms fly
At the mere touch of cold philosophy?
There was an awful rainbow once in heaven:
We know her woof, her texture; she is given
In the dull catalogue of common things.
Philosophy will clip an Angel’s wings,
Conquer all mysteries by rule and line,
Empty the haunted air, and gnomed mine—
Unweave a rainbow, as it erewhile made
The tender-person’d Lamia melt into a shade.[3]

The Lamia character referred to is a snakey monster pretending to be a blushing bride in order to trick the groom into marrying her. The philosophy referred to in the passage quoted is how the potential discovery of this truth might destroy the happiness of the unfortunate groom. This is certainly not as straightforwardly anti-science as it is generally presented. Fundamentally, the idea supposes that what one might discover through science is uglier or less magical than the ideas held in blissful unawareness. As scientists and philosophers, we believe that the opposite is true.

The scientific insights we’ve inherited have given us a deeper appreciation of light and colour, and we remember that the stories remain forever potentially incomplete, and open to new observation, and new insights. For now, our best theories confirm that children’s rainbows with their diversity of colour schemes may be truer to life than the ‘ideal’ seven-colour rainbow of the past. Rainbows are an incredible phenomenon, each unique to every individual but shared by everyone. They are a worthy symbol of our collective hope.

Although significantly revised, an earlier version of this piece appeared in an article https://morningstaronline.co.uk/article/f/political-spectrum-how-we-imagine-rainbows cowritten with Liam Shaw and Joel Hellewell