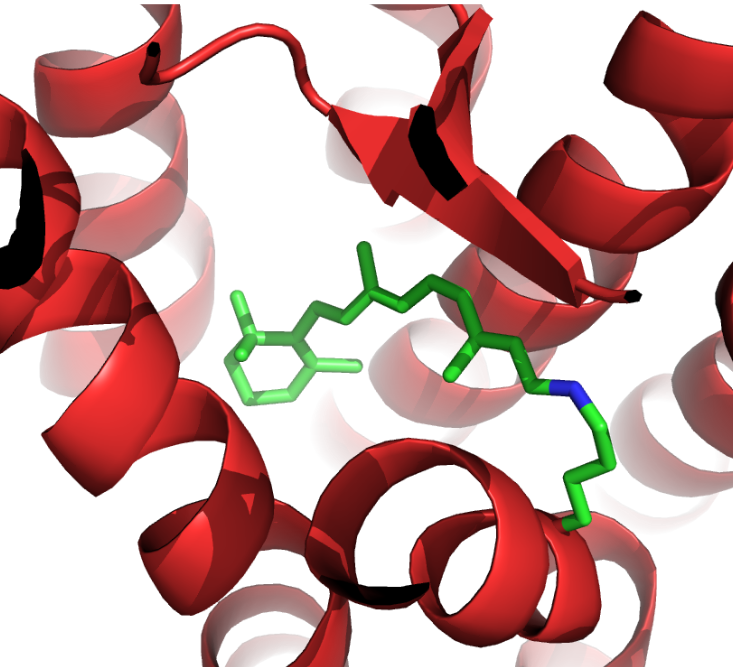 Posted at 16:51h in blog by John Mellerio
Share

This piece by Alex Holmes was shortlisted in the Colour Group (GB) Prize for Outstanding Communication on Colour 2021.

When you look at the things near you, what do you notice first? It is likely their colour. Maybe a nearby plant with green leaves, or red blood from an accidental papercut. Whatever it is, colour tends to be a major part of visual information the brain is interested in when it takes in a scene. This is because, from an evolutionary perspective, colour tells us all sorts of important things. Maybe the brain is registering that someone is unwell because they have red cheeks and have a temperature, or a warning not to touch that frog or plant due to its vibrant colours signalling danger. It is essential that the body is able to recognise and respond to different colour stimuli.

The colours of different living things are controlled by biological processes and usually have specific functions for their survival. For example, flamingos are coloured pink due to the beta carotene in their diet, and during mating season, the pinker they are the more likely they are to find a mate and pass on their genes. Plants are typically green leaved due to the presence of chlorophyll. Being green is advantageous to a plant as they can more effectively absorb the energy from the other colour wavelengths in sunlight and efficiently photosynthesise. These colourful adaptations are also found in humans. Eye colour is controlled by proteins determining the amount of a pigment called melanin. Its varying quantities in the iris result in different colours. However, it is not just these proteins in the eye; there are proteins that determine everything humans are able to see.

Visible light is the part of the electromagnetic spectrum that human eyes can register. However, the spectrum of wavelengths does not stop either side of purple and red but extends to other regions, such as ultraviolet and infrared. When light enters the eye, it lands on different cells in the retina called cones and rods. Rod cells are responsible for low light vision, where as the cone cells are responsible for high light intensity and colour vision. When different wavelengths of light hit these cone cells, it activates them and sends signals to the brain to process what is being seen. The number of different cone cells is what determines how many colours an animal can see. For example, humans have 3 and see visible light, dogs only have 2 and so can see fewer colours than humans, and shrimp have a mighty 16 different types of cones.

In these cone and rod cells are proteins called opsins, one of the best studied examples is called rhodopsin. This is a light sensitive protein and when a photon of light hits it, it is absorbed by a pigment attached to the protein called retinal. This causes a change in its chemical structure, which then causes a change in the shape of rhodopsin. This triggers a series of events in the cell that lead to movements of ions and the sending of signals into the brain. These tiny alterations of the shape of rhodopsin are essential for this process, and something that scientists were keen to understand and see.

Rhodopsin is very small and measures less than 50 nm in size. The wavelengths of visible light are between 380 nm and 740 nm in comparison, meaning that they are too big too see what rhodopsin looks like, much like trying to feel the detail on a penny while wearing a novelty foam finger. However, in 2000, scientists led by Palczewski managed to see this protein for the very first time and started to piece together how it worked. Instead of using visible light, they used a different part of the electromagnetic spectrum: x-rays.

X-rays have wavelengths between 0.1 nm and 10 nm, which is much better suited for seeing a protein only around 50 nm big. Just like when visible light travels through glass or water and creates a rainbow of colours, x-rays do something similar when travelling through a crystal of protein. Scientists are able to use this technique to generate an image called a diffraction pattern, which can then be processed, and the shape of the protein found. The shape of rhodopsin is very particular, 7 spirals or “helices” which span the membrane of the retinal cell, and at the centre of these helices, sits retinal ready to have its chemical structure changed by a photon of light. 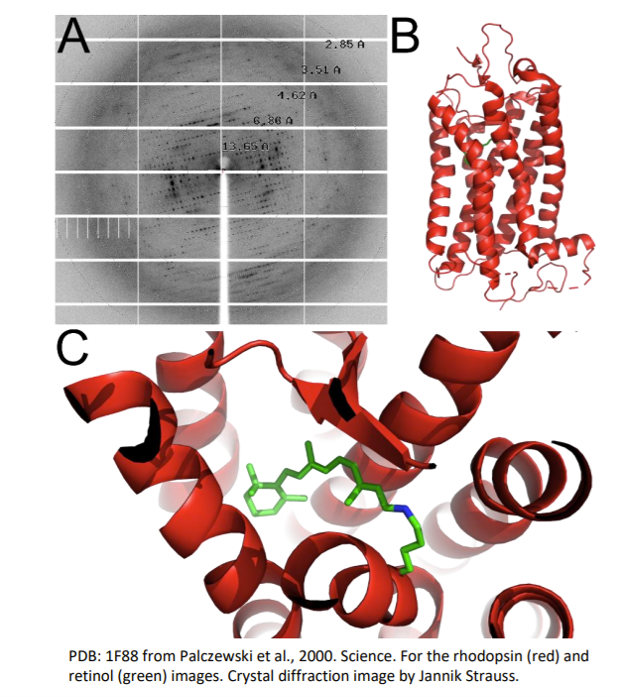 However, despite being smaller than visible light, rhodopsin is not impossible to see by eye. When enough of this protein is together, it looks pinkish-red. This is not the only protein that has a colour despite being so small. The colour of blood comes from the protein haemoglobin, which carries a molecule called “heme” which has a red colour. An even more striking example is jellyfish, some of which have a protein called Green Fluorescent Protein, which lets them glow green. Slight modifications to this protein can change it to yellow or blue.

In order to understand sight on a molecular level, the proteins involved in reacting to light need to be visualised. This is done in a process very similar to human sight, except x-rays are used to piece together the scene. Once this information is available, colour can be investigated on almost every resolution: from superficially looking at a whole object, down to the cells receiving that information, the proteins responding to the information and the small chemical changes occurring in those proteins to trigger these events. Even when these are smaller than colourful light itself. 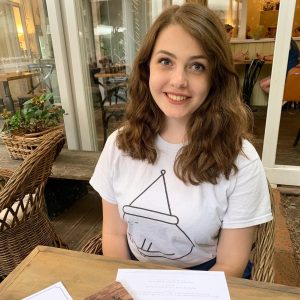 Alex Holmes (she/her) is a PhD researcher at the Faculty of Biological Sciences at the University of Leeds. She’s found herself working somewhere between biochemistry and biophysics to research membrane proteins, including mPPases and Piezo1. When she’s not working away in the lab or “hacking” supercomputers, she is very interested in science communication and public engagement. She has led stalls for university events, been a Pint of Science city coordinator and had her work made into colouring pages. Alex isn’t the kind of scientist you might think of when you think of “colour”, but she loved writing this essay.