The Mystery of the Ocean’s blue 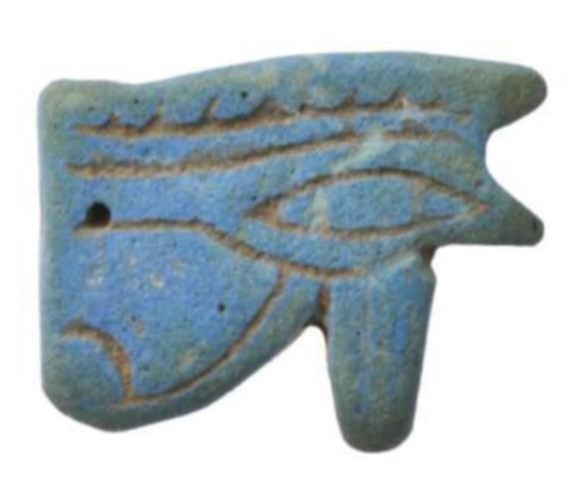 01 Oct The Mystery of the Ocean’s blue

Posted at 21:45h in blog by John Mellerio
Share

In this entry shortlisted for the Prize for Outstanding Communication on Colour, Jasmine Lee explores the colour blue.

“Our cosmic oasis, cosmic blue pearl, the most beautiful planet in the Universe. Diverse cultures, beliefs and ways, We are humans, Earth is our home, All the people and all the nations, One for all and all for one, United we unfurl the blue marble flag,” – Abhay Kumar

In his ‘Earth Anthem’, featured in the UN’s commemoration of 2020’s Earth Day, poet and diplomat Abhay Kumar wonders at our planet, a ‘blue marble’ that rolls against the black expanse of the universe. Over 70% of the Earth’s surface is covered in water, giving our planet its signature blue ripples. Our oceans, providers of life to humans, marine creatures, and thousands of other mysterious forms of life, make our planet a thriving blue oasis in a space desert. What cultural significance does our ocean have, and what gives it its captivating colour? 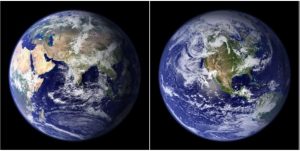 Cultural Depictions of the Ocean

The ocean’s important role in human culture is reflected in its regular presence in art and literature, from ancient cultures through to modern marine art. Picture Hokusai’s woodblock print ‘The Great Wave Off Kanagawa’, arguably the most iconic piece of Japanese art. 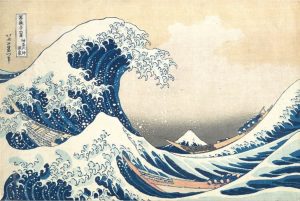 The piece shows a great wave towering over Mount Fuji, and beautifully captures the ever-changing essence of the sea. Smooth curves of Prussian blue sea are juxtaposed with frothy and foreboding duck-egg blue, fingerlike wave crests. Hokusai’s use of various shades of blue perfectly contrast the raw, tumultuous power of the ocean with its calmer, smoother motion. Hokusai’s juxtaposition mirrors human responses to the sea, which is met with feelings of uncertainty and fear, as well as familiarity and calm. However you might feel about the ocean, it is undeniably powerful in its propensity to evoke emotion.

However, the ocean and its colour has not always held such significance … In the 1800s William Gladstone, a Classics scholar who went on to become British prime minister, noticed some strange descriptions of colour in Homer’s ‘Odyssey’. Puzzlingly Homer describes the stormy ocean on which Odysseus sets sail for ten years as ‘oînops póntos’, a wine-dark sea. In fact, the entire epic fails to mention the colour blue even once, leaving Gladstone to the (much criticised) hypothesis that all ancient Greeks suffered mass colour-blindness! A ‘wine-dark planet’ doesn’t sound quite as appealing…

The Absence of Blue

Gladstone’s interest sparked further debate amongst scientists, historians, and linguists alike. Could ancient Greeks really not see the colour blue? Further investigation by Geiger, a philologist (specialist in the study of written records) revealed something very peculiar. Texts in ancient Greek, Icelandic, Hindi, Chinese, Arabic and Hebrew all shared something perplexing in common… a total absence of the colour blue. But why?

Take a minute to consider the naturally occurring blue animals and plants and you will soon realise that there aren’t many. Blue simply isn’t an abundant colour in nature, so it’s not too surprising that a word for blue didn’t exist in ancient civilisations. In fact, ‘blue’ was only invented around 5000 years ago, when ancient Egyptians began making blue pigments using Azurite and Malachite semiprecious metals. The colour’s late start is even reflected in some modern languages. In Korean, ‘pureu-da’ means both green and blue.
So, whilst blue did technically occur, it didn’t exist as a concept for many thousands of years. This leads us to the important question, what makes things blue? Is colour a natural reality or human perception? 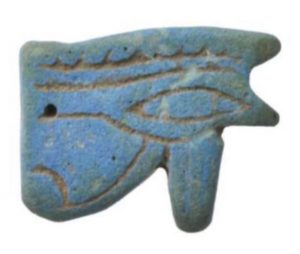 An Amulet dated around 664BC – 525BC and made using Egyptian Blue pigment, British Museum. See more artefacts here

How Does Science Explain Why the Ocean is Blue?

Water is crystal clear, so what makes the oceans blue? A common misconception is that the ocean mirrors the blue of the sky. However, the real answer to the ocean’s ultramarine hue is actually rooted in its depth. When sunlight hits the ocean, it is largely absorbed. However, the depth of the ocean prevents the light from reaching and reflecting off the seafloor. Instead, the light interacts with millions of water molecules, which either absorb or scatter the sunlight, and this holds the key to the ocean’s colour.

The human eye, unlike some other members of the animal kingdom, is limited to the visible light spectrum; we see a rainbow of colours, ranging from long, red wavelengths (700 nanometres) to shorter, blue ones (380 nanometres). Water molecules are strong absorbers of longer red wavelengths but absorb blue light weakly. Instead of absorbing blue light, water molecules reflect and scatter it, making the ocean appear blue.

The ocean’s colour can tell us about its health and has become a useful tool to scientists. Far from ‘pure’ water, our oceans are teeming with life forms, including microscopic phytoplankton. Phytoplankton are marine algae that live in the sea and give the ocean its typical green-blue tint. In the sunlit layer of the ocean, phytoplankton photosynthesise, capturing carbon and, scientists believe, producing at least half of the oxygen in our atmosphere. Though tiny, they have a huge impact on our oceans.

As well as photosynthesising, phytoplankton are the main source of food for many marine animals, and they regulate important biogeochemical processes such as the cycling of Nitrogen, Sulphur, and Phosphorus! They are incredibly important to our planet, and as such their abundance can tell us about the health of the sea.

How do phytoplankton change the ocean’s colour?

Phytoplankton use chlorophyll, a green pigment, to photosynthesise (just like plants). Satellites in space frequently perform ‘remote sensing’, tracking the amount of phytoplankton in the sea; it does so by analysing colour. The more phytoplankton present, the more beneficial processes taking place, and the greener the ocean. Contrastingly, ocean ‘deserts’ devoid of life (known as oligotrophic gyres) have little phytoplankton and as such are bluer. (Occasionally things get really crazy and red algae turn up, these are extremely toxic to both fish and humans!) 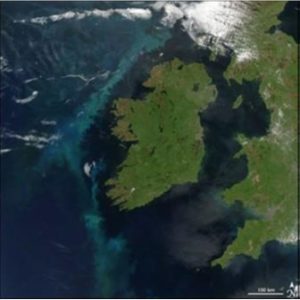 As the climate warms, scientists worry that phytoplankton may suffer alarming declines, depleting the Earth’s oxygen supply, and threatening fish that rely on phytoplankton for food. Recent research suggests that shifts in ocean colour, caused by changes in phytoplankton communities, could be pivotal in detecting early signs of climate change and its effects on the sea.

As well as its significant cultural relevance, the ocean’s colour is now taking on a new role in detecting climate change. Far from our past ignorance of blue, the colour of the sea is now more important than ever.

Jasmine Lee is an undergraduate student from London. She is currently studying Biological Sciences at the University of Warwick, with a keen interest in biodiversity. She hopes to pursue a career in Marine Biology. In her spare time Jasmine enjoys painting and literature.