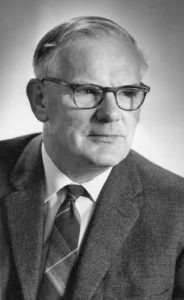 The name of W. David Wright is famous the world over in the field of colorimetry. In the late nineteen-twenties he measured, for ten observers, the way in which the colours of the spectrum are matched by beams of red, green, and blue light added together. This work, together with a similar study carried out by John Guild at the National Physical Laboratory, with seven additional observers, forms the basis of the international standard for measuring colour. It is a great tribute to the quality of this experimental work that the standard, although now more than sixty years old, is still in universal use.

David Wright carried out his work in the Physics department of Imperial College, and, except for a short interlude from 1929 to 1930, the whole of his career was at Imperial. The interlude was spent as a research engineer at Westinghouse Electric and Manufacturing Company, in Pittsburg, where he worked on colour television; this was long before even black-and-white television was a practicality, but the colour television systems in use today use Wright’s work as the basis of their reproduction of colour by the addition of areas of red, green, and blue light.

Wright’s researches at Imperial College covered many aspects of colour vision, and were summarized in his book Researches on Normal and Defective Colour Vision published in 1946, one of five books which he wrote. The same meticulous care in his experimental work that had characterized his original colour matching experiments, was evident throughout all his investigations, and led, for the first time, to definitive descriptions of the main types of colour blindness. The publication in the magazine Picture, Post of a test for a very rare type of colour deficiency, in which bluish and yellowish colours are confused, led to the discovery of about a score of people with this defect, and the characteristics of their vision were documented accurately for the first time.

As a professor at Imperial College, he was both a fine lecturer and an outstanding supervisor of post-graduate students. There issued from the college during his tenure, a continuous stream of students who were thoroughly grounded in visual science and sound experimental procedures; today, at any conference on colour science, many of his past students are to be found presenting work which owes its inspiration to his influence.

His work outside academia was broad and notable. Seeing the need for workers in colour science to have a forum for regular meetings, he was largely instrumental in the formation in 1940 of a Colour Group in the Physical Society, and this Group still flourishes although now as an independent entity. Following the example of the British Colour Group, similar groups have since sprung up in many other countries, and together form the International Colour Association.

A keen admirer of paintings, he combined this interest with his colour science to conduct a series of measurements on paintings at the National Gallery to provide data on the permanence of some of its treasures.

He was a passionate follower of cricket and thoroughly enjoyed a day out at Lord’s.

In 1932 he married Dorothy Hudson, who died in 1990; they had two sons, one of whom predeceased him.

David sowed the seed of interest for so many of us in colour science today. He was warm hearted and of a kindly disposition. He will be sadly missed by us all. We will honour his memory, remembering his great contributions to colour science and the friendliness and warmth of his character.